The conception of GeoStone Retaining Wall Systems was preceded by a construction company owned and operated in Birmingham, Alabama by Fred Agee which since 1989 has specialized in the promotion, design, and construction of segmental retaining walls.  Mr. Agee built the first segmental retaining walls in the state of Alabama and since then has used most of the modular wall systems available on the market.  Each module has its unique patented design for achieving connection strength.

Having experienced first hand the limitations and restrictions to wall construction imposed by the modular wall systems on the market, Fred Agee created the design of the GeoStone product as we know it today.

The first step in the manufacturing process is the design and building of the GeoStone molds compatible with the machines used to manufacture block in a concrete block plant. The next step involves extensive testing of the module to determine the connection strength which is used to develop the design criteria used by engineers in the designing of GeoStone Retaining Walls.

GeoStone templates have been developed to be used in conjunction with NCMA Segmental Retaining Wall design software as a convenience to engineers in the design of GeoStone Retaining Walls.

Having achieved successful results from the connection strength testing and experienced excellent results from the manufacturing and marketing of the product, efforts were undertaken to achieve copyrights and patents for our module’s unique design.

Today the patents have been obtained and close to one million GeoStone modules have been used in construction of retaining walls in North America.  There are plants in Alabama, Arkansas, Florida, Georgia, South Carolina, Tennessee, Virginia, Pennsylvania, and Missouri who are currently manufacturing and marketing GeoStone under our license agreement.

GeoStone is continuing to expand throughout the southeastern United States and up the eastern seaboard.  Word has gotten out about the simplicity of the system from both manufacturing as well as an installation standpoint.  GeoStone's revolutionary open core retaining wall concept has led to design changes in a lot of competitive wall systems, but GeoStone still remains one of the largest and most successful open core modular retaining wall systems on the market.  The reason for this success is simple.  A larger core means less weight, more rock interlock, and superior drainage capability.  It doesn't take a genius to see the advantages of such a system.

GeoStone is marketed in the retaining wall industry as a two piece system that is capable of accomplishing most applications required in all facets of retaining wall design and construction.  Competitive systems require entire lines of 10+ items just to accomplish as much.  We at GeoStone have based our wall system around the ideas of simplicity and functionality so our products can perform in most situations.  The idea was not to create a different product for each application but to create a product that would be versatile enough to accomplish them all.  As more GeoStone walls were installed, we came up with more uses and creative methods of accomplishing various applications such as interlocking corners, ashlar, and columns, just to name a few.  Professional installers have picked up on this and have become key players in developing new ideas and solutions in the field.

GeoStone also has what we call "complete freedom of installation."  That is where an installer is completely unencumbered by any such built in appendage such as a lip or lug which is supposed to align the block.  These appendages do help with alignment but more times than not, they get in the way when building anything other than a straight wall.  Lip systems cannot build a vertical wall, unless the lip of each block is sawed or knocked off.  Any experienced installer will attest to how time consuming that is.  Lug systems loose their alignment properties in radius applications and at least one lug must be shaved off of each block, sometimes both depending on how tight the radius is.  Lug systems also are not capable of going vertical unless shaving occurs.

Pin systems utilize a hole in the block in which a pin is placed to connect with the two blocks above in the wall.  Pin systems also have problems with alignment when radius is combined with batter.  The result is after a certain height, depending on the severity of the radius, the pins must be taken out in because they will not align with holes in the block above.  The only other solution is to build a near vertical wall.  A battered wall is always stronger and some wall designers do not like to be limited by this lack of option.

Being able to build modular retaining walls vertical is a good option to have.  Sometimes property restraints dictate it.  Sometimes a vertical application simply looks better, as with a retaining wall with internal stairs.  These are options that are available with GeoStone and its lack of limitation but these are only a handful amongst many.  Please visit our video section as well as our Technical Section (especially the 3D Renderings!) to see the other such advantages of the GeoStone retaining wall system.  You will find as have many landscape professionals, weekend wall builders, large commercial wall builders, and hardscape products manufacturers that GeoStone Retaining Wall Systems is the best modular retaining wall system on the market. 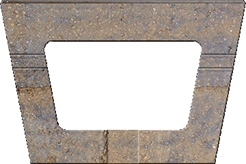 The Most Competitively Priced Retaining Wall System On the Market!

Both are a stand-alone system capable of building fully structural engineered retaining walls of major heights.  They can also be used in combination for banding or true ashlar wall systems (see ashlar gallery).  The ashlar retaining wall is a major advantage to any installer or manufacturer not only because of its look but because of its price.  GeoStone Ashlar is normally half the cost of most other ashlar systems on the market.  The success and satisfaction of those who have tried it is a testament to what a great retaining wall system GeoStone truly is.

If you would like more information on GeoStone Retaining Wall Systems, Inc. licensing and manufacturing opportunities, please contact us at 205-678-9969 or email at web@geostone.com

Chat with someone live about your project or just ask a question.

Responses may not be available after business hours.